Tour of the Palace

The main building, in the shape of a U, has a basement, ground floor and two upper floors. The main façade of the building is joined to two wings by a Doric colonnade and two arches: the gates of Saint George and the Archangel Michael. The ground floor, which is supported on Ionic columns, housed the administrative offices of the UNHCR as well as the chambers of the Ionian Senate and Congress. An impressive central staircase leads to the Corinthian style colonnade of the first floor.

The central section is dominated by the official chambers of the Order, which survive to the present day: the circular Lobby (Rotunda), the Throne Room and the Symposium Hall. To the right and left of them, in the first floor wings are the living room, the dining room and other apartments belonging to the Commissioner. Two spiral staircases allowed access to the second floor, where the staff was housed. 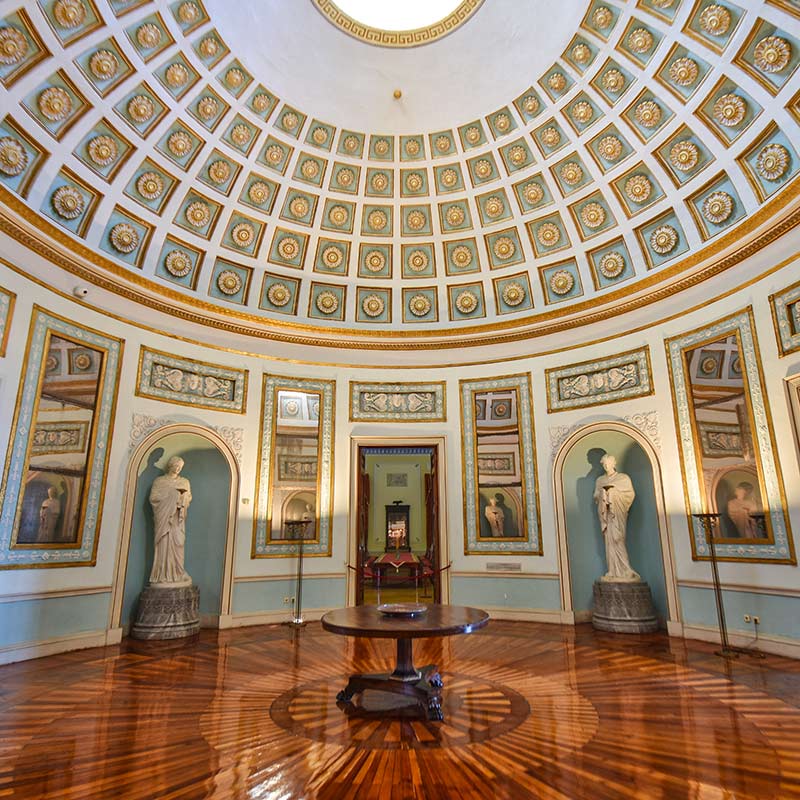 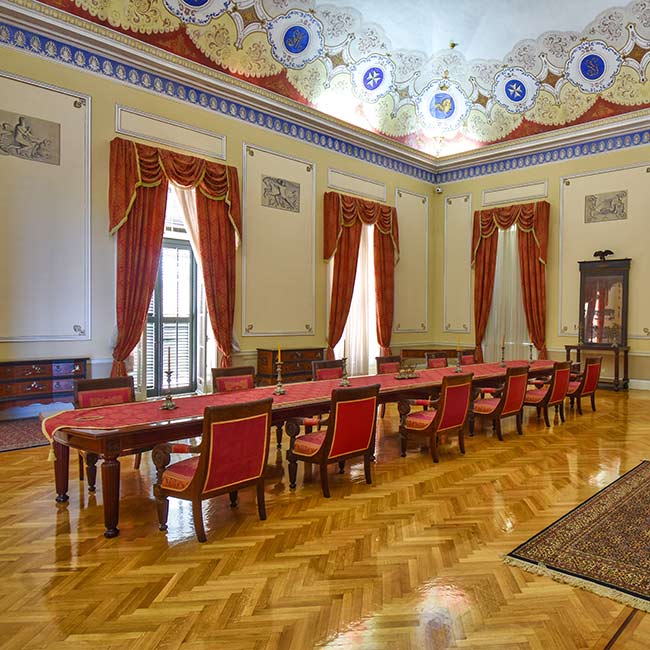 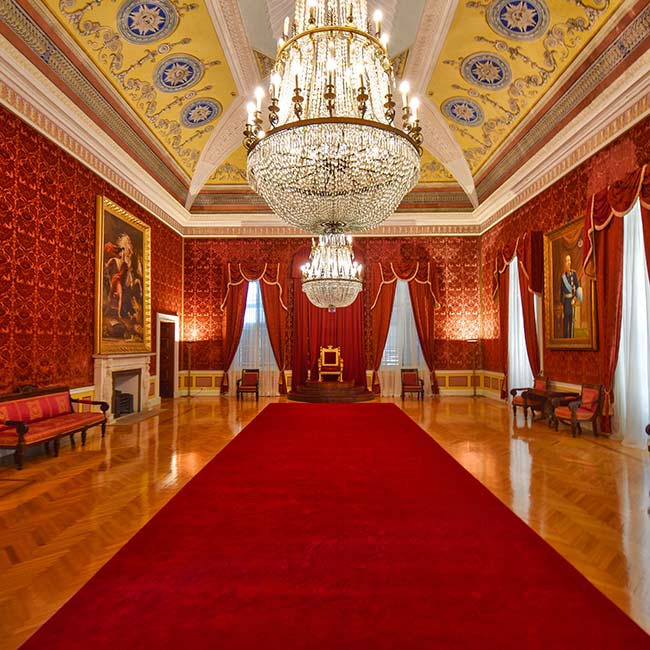 The Palace of Saint Michael and Saint George extends over the entire northern part of the Spianada square. The main entrance, leading to the ground floor colonnade is accessible through the external Doric colonnade.

The ground floor Ionic colonnade is the Palace main reception hall. The upper part of the walls is decorated with painted frames depicting scenes from Homer’s Odyssey, alternating with birds and floral designs. Below them exist niches and mahogany doors, leading to multifunctional rooms.

The ground floor had to be redesigned to include larger halls, while construction works were already underway. The new halls housed the Ionian Senate and the Ionian Parliament, which were initially supported to be located in autonomous buildings. Whitmore, in order to elevate and enlarge the room, maintaining at the same time the harmonious ratio of his original plans, placed the colonnade columns on podium which surrounds the ground floor on its eastern, western and northern sides. 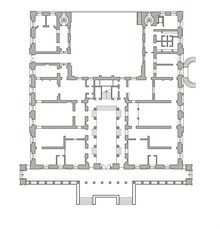 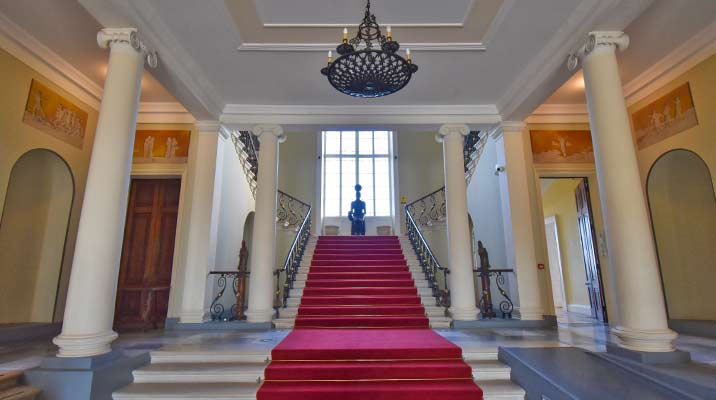 The Ionian Senate Meetings Hall is located in the western side of the ground floor and, until today, maintains the largest part of its original decoration intact. Its centre is dominated by the authentic Ionian Senate meetings round table, as well the original Senators’ chairs, designed by Whitmore. The walls are adorned by Senate Chairmen portraits, works by the Ionian Island painter Dionyssios Vegias. On either side of the entrance, one can admire the busts of Lords High Commissioners Sir Thomas Maitland and Sir Frederick Adam, sculpted by Pavlos Prosalentis, Sr. in 1821-22 and 1825 respectively, while in the Hall’s two windows the bust of King George IV of England, painted by Sir Francis Legatt Chantrey in 1823. 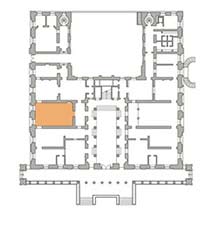 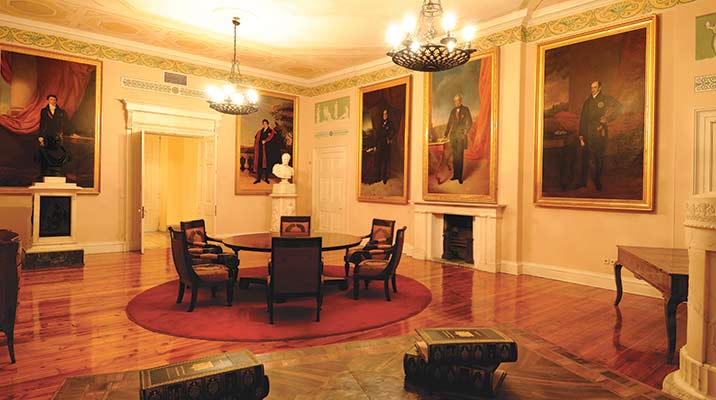 The central staircase starts from the northern side of the ground floor and branches off leading to the first floor colonnade. The colonnade is based on Corinthian style columns and was adorned with a ceiling fresco, which still survives in part.

It is the antechamber to the monumental hall of the Most Distinguished Order of Saint Michael and Saint George and the floor’s wings, where the main exhibition areas of the Museum of Asian Art are deployed today. 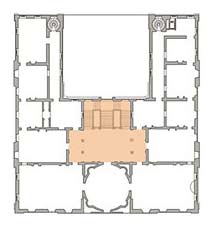 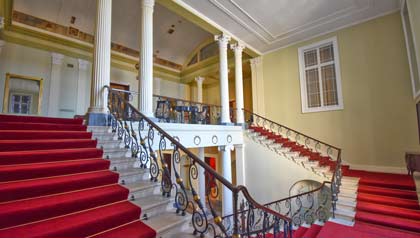 The Throne Room, measuring 16.46m by 10.06m with a height of 8.23m, is by far the most impressive one in the Palace. It once served as the Lord High Commissioner’s hearings hall as well as the venue for all of the Order’s official ceremonies. Following extensive damage it suffered during World War II, its tapestry, drapery, ceiling frescoes and floor were restored to their current form and condition.

The two fireplaces of the hall, made of white Carrara marble, are adorned with relief female forms reminiscent of the Caryatids and were made in 1821-22 by Pavlos Prosalentis. Over the fireplaces are hanging elaborate gold-plated mirrors, on either side of which exist two enormous oil paintings of Saint Michael and Saint George, both 19th century copies.

The eastern wall is dominated by the original gilded throne of the Lords High Commissioners, which –just like the rest of the furniture – was designed by Sir George Whitmore. Opposite the throne, one can see the musicians’ box.

The roof is decorated with the insignia and the initials of the `most Distinguished Order of Saint Michael and Saint George. In the middle of the ceiling, one may admire the Order’s main insigne, the seven-rayed star. The star sports Saint George in its centre, patron saint of Britain. Around the centre, one may read the Order’s motto in Latin: AUSPICIUM MELIORIS AEVI. 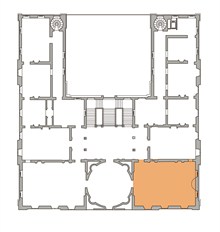 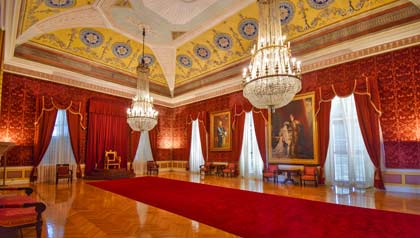 The Reception Hall is of circular shape, which is why it is called “The Rotunda” (which is Italian for circular). It measures 10,67m in diameter and 10,67m in height. The roof is dome-shaped, according to the Roman pantheon style, is coffers and ends up in a round opening (oculus).

The walls around it are decorated with alternating niches and mirrors. Inside the niches one can admire claim lamp-statues of Vestals, each measuring 2,44m in height. The Rotunda floor, of unique design and great artistic value, is of radial design using different woods so as to create an elaborate pattern. 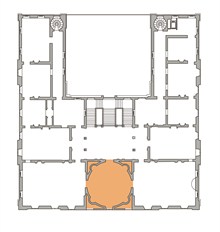 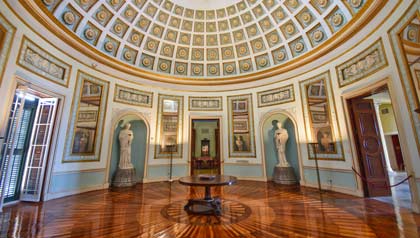 The Banquet Hall, of the same dimensions as the Throne Room, was unfortunately completely destroyed during the Greek Civil War by a fire. Its ceiling was subsequently redecorated with Order of Saint Michael and Saint George insignia, initials and seven-rayed stars, while its walls sport themes symbolizing the Ionian Islands: Pegasus with Bellerophon for Lefkas, Ulysses’ head for Ithaca, the mythical heroes Cephalus and Zakynthos for Cephalonia and Zakynthos respectively, the trident for Paxos, Aphrodite with a dolphin for Cythera and the “rudderless ship” for Corfu.

The hall was illuminated by two chandeliers identical to the ones in the Throne Room. Another such chandelier used to hang in the Rotunda. Today, all three are in Athens, in the Hellenic Republic Presidential Mansion Reception Hall, as they were transported there in 1962 on the occasion of the wedding of the then Princess Sophia to prince Juan Carlos, current King and Queen of Spain. 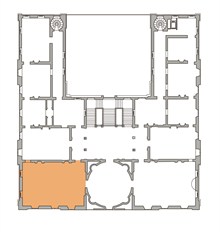 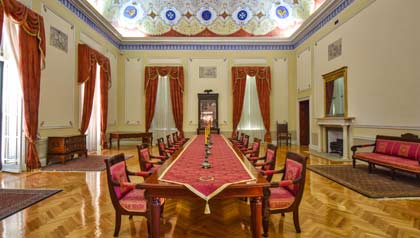 To the left and right of the Throne Room and the Banquet Hall were situated the Lord High Commissioner’s Dining Room and Lounge respectively. From their original décor, only the murals and the ceiling frescoes still survive, as they were conserved and restored as part of the Museum of Asian re-exhibition project.

Today they are the halls leading to the Manos wing, which contains works of Chinese art and the Hadjivassiliou wing which contains South and Southeast Asian works of art and Japanese painting. 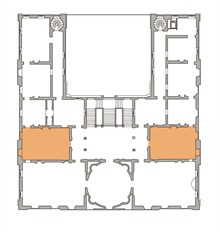 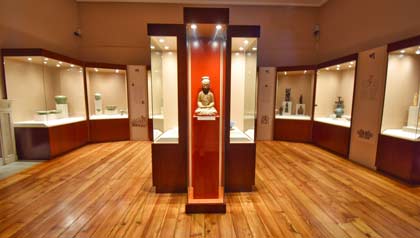